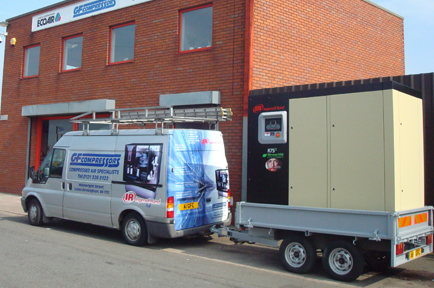 GF Compressors is a family run business and was started up over 40 years ago by its founder George Fabo. George was originally from Hungary and a fully trained tool room engineer. Upon his arrival to the UK, to see his mother he was offered a job as a toolmaker at a well known UK manufacturing company.

George had always been a keen worker and enjoyed undertaking his own projects at home. He first developed an interest in air compressors as he was looking for a solution to power a pneumatic shelf in his cupboard. After obtaining all the parts himself and building the shelf from scratch to completion the shelf would rise and lower at the push of a button. After showing his friend his work and turning down his offer to purchase the device George decided to create another unit for his friend. The success of his device allowed him to get more orders and start the company as we know it today, GF Compressors.

After making the decision to venture into more commercial industrial sized compressors George specialised in the old piston and water-cooled compressors which GF Compressors is still well known for to this day. With the business growing more and more successful the company was able to build its first premises on Wainwright Street in 1983. Since the creation of its first premises GF Compressors has grown to be a successful business and has served clients such as the BBC with some of its air compressors.

Wishing to keep the business in the family Georges two sons, Robert and Thomas, joined their father in 1983 and 1986 respectively.

To keep up with current demand GF Compressors became an official distributor of the German based company Ecoair. Ecoair specialised in screw compressors and equipment. Ecoair was later taken over by industry leaders Ingersoll Rand in the early 1990's. The continued success of Ingersoll Rand and GF Compressors meant we out grew our original premises on Wainwright Street and had to move to another location on Wainwright Street. Our continued success over the last 40 years still allows us to employ and train new engineers all the time, by keeping a fresh work force we can stay on top of the air compressor market and evolve as the industry evolves.

Everyone at GF Compressors is proud to be part of a knowledgeable successful business and we continue to go from strength to strength even through todays harsh economic climate.

By still having knowledge in the area of older water-cooled and piston equipment we have been able to supply equipment to Ghana, Nigeria, Bangkok, Venezuela, Ivory Coast. Even after over 20 years these machines still running reliably today and we continue to provide necessary service parts.

Over 40 years of experience